You have written your policy, you have selected your camera vendor, and you have trained your officers and deployed your cameras. Now what? Will your agency’s deployment be successful? Do you know if it was worth all the time, effort, and resources? Are you able to point out successes to your community and local officials? Are you able to identify challenges and develop solutions? Can you assess implementation progress and improve outcomes to make the deployment more valuable to your agency, your officers, and your community?

The webinar provided a brief overview of the BWCPIP program goals. The main purpose of the webinar iwa to orient your agency personnel to the programmatic, financial, and administrative requirements of the grant, as well as to the training and technical assistance (TTA) elements of the grant. Both grant administration and TTA will be vital to successful completion of your BWCPIP grant.

Body-worn cameras (BWCs) represent one of the most important advancements in policing over the past century, and they present formidable challenges on several fronts –community engagement, policy development and implementation, equipment selection and purchase costs, equipment maintenance and storage costs, privacy concerns, training, impacts and coordination across the justice system, program assessment, and more.

As the implementation of body-worn cameras (BWCs) continues in police agencies across the country, there appears to be an increase in acceptance of—and, in many cases, demand for—the technology by officers. Police recognize that BWC technology is here to stay and a majority of communities expect their police departments to adopt them. Still, officers and agencies do not uniformly embrace BWCs. Some officers do not readily “buy-in” to the need for and benefits of BWCs. This In View provides the perspectives of two BWC subject experts who come from different backgrounds—one a former police supervisor and one a current police sergeant.

Many police officers feel that the recent climate and attitudes towards the police have changed because of highly publicized, controversial use of force incidents around the country. Police officers currently carry (and must be proficient with), far more equipment than they did just 20 years ago. BWCs represent another tool that a growing number of officers are now required to carry—one that some officers prefer not to have. Some officers feel that the current push for BWCs stems not necessarily from a goal of helping them to do their jobs better but a means to surveil how they do their jobs. It is important to understand how some officers may view BWCs only as a mechanism for supervisors (and others) to scrutinize their actions and look for bad behavior or policy violations (that would go undetected when not wearing a BWC). While these concerns are real, BWCs provide many benefits. BWCs are quite possibly one of the most beneficial tools that officers can have. Departments should recognize that while officers typically view a new piece of equipment (such as an electronic stun device) as helping them with their tactics and safety, some officers could have a different perspective when required to wear a BWC. One can argue that if BWCs had been introduced to policing at a time when societal support and understanding were more positive, all officers would have more readily embraced them.

Whether you are a chief, a supervisor, or an officer, if you examine all the potential benefits associated with BWCs, it becomes difficult to understand why officers would not want to wear them. Some benefits include the following:

It is unfair to paint all police with the same brush when a very small percentage of officers engage in inappropriate conduct. However, this is the world police officers live in, and we hope that officers will accept BWCs as a mechanism for demonstrating the 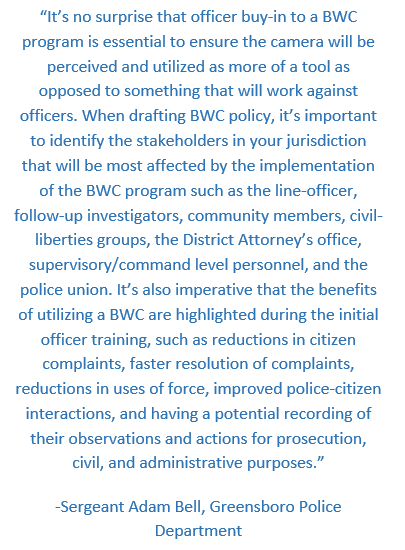 good work that they do every day. We believe that BWC implementation will bring with it strong emotional reactions from officers. BWCs are a means to demonstrate the vast decision-making responsibilities and discretion that officers exercise and provide the ability to challenge potential misconceptions relating to abuse of power allegations.

A supervisor’s role is to help officers succeed and improve. Chiefs, command staff, and supervisors should not just communicate and engage with their officers on why the department is choosing to establish a BWC program; they should provide officers and their unions the opportunity to contribute to the implementation and policy development. Departments and officers can collaborate on issues such as officer privacy concerns and supervisor review of footage, following the example of the Greensboro, North Carolina, Police Department and many other departments. When possible, supervisors should explain research on BWCs to officers so they understand the empirical outcomes of implementing a BWC program. Supervisors should communicate all the potential benefits and limitations of BWCs to the officers, and work to empower them to own and support the program. The development of this shared responsibility should be an ongoing process. Supervisors need supervision as well, and BWC policy needs to be clear on when and how supervisors will review the footage. Arbitrary retroactive review of BWC cannot be allowed once BWC footage has been reviewed through the proper channels.  For example, organizations should think about “double jeopardy” policies for BWC footage: once one member of the chain of command reviews BWC footage and deems it an appropriate use of force or appropriate use of courtesy, another member of the chain of command cannot review the footage and come to a different disciplinary outcome. These types of missteps in policy application reduce officer buy-in and weaken trust. Officers should be confident that once their BWC footage has been reviewed by their chain of command and internal affairs, a change in rank structure six months later will not reverse the previous decision. Leaders must apply fairness, common sense, and reasonableness when using BWC footage to train or discipline officers.

Finally, agencies should be cautious about devoting too much attention to officer “buy-in.” We have all heard the colloquialism that officers only hate two things, “change and the way things are.” It is human nature to resist change. Being forced to acquire a new skill is difficult. Buying in may come hard for some and it may not occur until the technology benefits the individual in a tangible way, such as having a complaint dismissed or the video being pivotal evidence in a court case. Until then, supervisors should ensure compliance with BWC policy through regular oversight, informally at first but more formally if noncompliance persists. An authoritarian approach will not help with buy-in, but following up on calls, checking to ensure officers turned on BWCs when they were required to, or complimenting officers on a job well done will go a long way to reinforce the use of BWCs during their daily routines. This is the key point—once a technology has been adopted into an officer’s daily routine, buy-in becomes a moot point; officers no longer think about the technology’s effect on their job, because it is just a part of their daily routine. Change is difficult and individual buy-in assists with organizational change. Officers in Chicago, Illinois protested new uniforms, equating them to milk delivery uniforms. Now officers take pride in their uniforms, wearing full regalia to promotional ceremonies. However, line officer buy-in is not always the only answer: good supervision and leadership go a long way, too.

This webinar focused on addressing the challenges that agencies and officers can experience when initially implementing a BWC program, especially regarding officer concerns, questions, and hesitations. Panelists highlighted the importance of having officers directly involved in the initial processes when an agency is considering implementing BWCs.